I grew up in a suburb of Toronto called Willowdale, a leafy, friendly neighbourhood that was a lot like a small town. 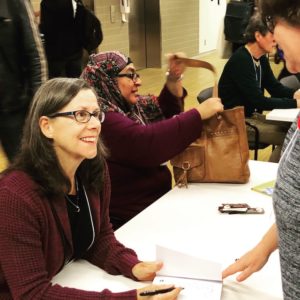 I always knew I would have a job that let me work with words. I went to Queen’s University and earned two degrees in English (BA, MA), with a specialization in Medieval and Old Norse literature. As a student, I worked as a broadcaster at Queen’s Radio CFRC, where I indulged my love of sports by taking over as Sports Director for two years, also contributing to the Sports section of the Queen’s Journal

My first job after graduation was writing promotional blurbs for CTV Television and while there, I started to focus on writing stories for children. My first book project – about a young girl struggling to find acceptance as a goalie on her brother’s hockey team – was never published, but the encouragement I received from editors convinced me that I was on the right path.

I had some successes in my early writing life: two novels (Wild Dog Summer and The Legacy) were published by Nelson Canada, an educational publisher, and I self-published a couple of novels (Abby and the Curling Chicks and The Toymaker’s Son). I also worked on book projects with an ESL publisher and had short stories published in magazines for kids.

I’ve been writing for a very long time, but Skating Over Thin Ice  was the first novel I had published by a mainstream children’s publisher. (Thanks, Red Deer Press!)

My second YA novel, Larkin on the Shore, was published by Red Deer Press and launched in January 2020 (yes, just before the pandemic shutdown…!)

My third YA novel, The Legend, was released in November 2021, again by Red Deer Press. And I’ve just completed a YA novel for the Orca Soundings line-up, (Wingman), which will be released in April 2023. Red Deer Press will also be publishing another YA novel, Bliss Adair and the First Rule of Knitting, in March 2023.

As well as being a published author, I’ve also been a college professor, teaching writing skills and communications at three different colleges over the course of about 18 years. And for 10 (very fun!) years, I was part of the Media & Communications team at Curling Canada, a job that combined my love of sport with my love of writing. I left the world of curling and high-performance sport to focus on my fiction writing, and I’ve never regretted it. (Fun Fact: The Legend is based on some of my media bench and CFRC adventures!)

The Eden Mills Writers’ Festival featured a Q&A with me in their Spring 2022 newsletter. Read about my writing life (books both published and upcoming) here: Spotlight on Local Authors

The Wellington Advertiser found me at a book signing at Magic Pebble Books in Elora, Ontario. Took a few photos, asked a few questions. Read the story here: Local author explores the world of sports media in her latest novel