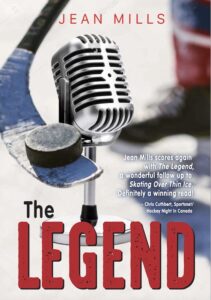 The Legend follows Griffin Tardiff, an injured teen hockey player, exiled for a year to a small town near Ottawa, whose life is complicated by an internship at a local radio station, a flawed adult mentor, two quite different girls, and a little boy who needs Griffin’s protection. 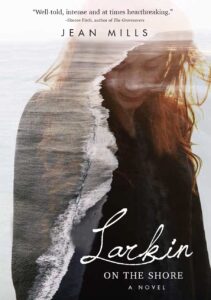 Sixteen-year-old Larkin Day sits on the shore in front of her grandmother’s house in Nova Scotia watching the sun set over the incoming tide – and imagines walking out across the sandbars, swimming towards Prince Edward Island and letting the waves roll over her head. Because, as she says, “Anything would be better than this.”

“Well-told, intense and at times heartbreaking, this young adult novel, set mainly in Nova Scotia, captures a sense of place, Atlantic culture and a book lover’s heart.” – Sheree Fitch, author of The Gravesavers

Here’s what REVIEWERS are saying about Larkin on the Shore:

“A quiet, healing journey on the beautiful shores of Nova Scotia… Readers will be pulled along by the strong voice in this emotional story.” – Kirkus

“Larkin on the Shore is a gripping coming-of-age story whose compelling senses of pain, loss, and healing are navigated with skill.” – Foreword Reviews

“Beautifully written, with vivid imagery of the Nova Scotia shore, this is a truly moving story of finding oneself after trauma, akin to Laurie Halse Anderson’s Speak, Francisco X. Stork’s The Memory of Light, and Maria Padian’s Wrecked.” – School Library Journal

“Adeptly written, with short, punchy chapters and moments of poignant intensity, Larkin on the Shore reveals the pain of mental illness and the healing power of human connection. Highly Recommended.” – CM Canadian Review of Materials

“This novel can be used effectively in a classroom thematic study of grandparents thrust into a parenting role, and would make an excellent discussion starter for the problems of fitting in as an adolescent. What’s more, its use as a young adult mystery could spark comparisons with other “junior sleuths.”

Early teen readers who offered their input loved the title character. The story prompted discussions about how the protagonist’s problems compared with their own issues.
This novel would be an excellent addition to young adult collections for any school, classroom or personal library collection.” – Professionally Speaking (Ontario College of Teachers) 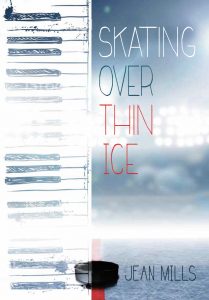 Imogen St. Pierre is an 18-year-old musical prodigy who has been performing with her father and grandfather in the world-renowned Trio St. Pierre since childhood. She lives in a musical bubble, guided and protected by her loving Papa and Père, happy as long as she is at the piano, detached and sometimes even unaware of the world and people around her. She is a celebrity who craves anonymity.

But Imogen’s world is beginning to shift and change.

Here’s what REVIEWERS are saying about Skating Over Thin Ice:

“Skating Over Thin Ice is a wonderful read which is inspiring and uplifting.

It is refreshing to read a young adult novel which focuses on talent and growth and finding happiness rather than the dark issues and themes which are so often confronted in young adult literature.

Mills has created characters who resonate and who will be remembered long after the covers of the novel have been closed.” – CM: Canadian Review of Materials

Here’s what READERS are saying about Skating Over Thin Ice:

“The characters are breathtaking, beautiful, strong, vulnerable, and complex. The plot weaves these two lives together exquisitely, like a spider’s web. The writing is accessible and elegant. The dialogue flows smoothly and draws the reader into the conversations. This is such a positive coming-of-age story about accepting change. I highly recommend this book to anyone 13 and up. It will draw you in, uplift you, move you, and maybe even change your outlook.” – Kids’ Book Buzz (written by 15-year-old reviewer)

“Skating Over Thin Ice, by Jean Mills, is a breath of fresh air in a YA market saturated with dark, post-apocalyptic content.  As someone who dedicates ten months of the year to looking for new literature that opens worlds, holds up a mirrors, or inspires kids to keep reading, I believe Skating Over Thin Ice has definitely made the cut.” – Carey Gallagher, Assistant Upper School Head and Upper School English Teacher at St. John’s-Kilmarnock School, Breslau, Ontario

The Eden Mills Writers’ Festival featured a Q&A with me in their Spring 2022 newsletter. Read about my writing life (books both published and upcoming) here: Spotlight on Local Authors

The Wellington Advertiser found me at a book signing at Magic Pebble Books in Elora, Ontario. Took a few photos, asked a few questions. Read the story here: Local author explores the world of sports media in her latest novel